I did this sketch from three CCTV images which were recently given to me, showing another prisoner being led from the scene of a fight to the segregation unit.

The full film shows four officers and a specialised dog handler escorting the prisoner from the scene of the fight to the unit where he would spend the next few months before being transferred to another prison. What is most concerning is the behaviour of the officers as they stand waiting for the gate to the unit to be opened electronically. The female officer backs off and the dog handler disappears from sight but the three remaining officers surround the prisoner. The biggest of the three officers stands side on to the prisoner with his right arm pulled back, the second officer circles round behind him, and the final officer holds his hands behind his back and leans right in to the prisoner’s face.

I can’t possibly say what the officers intentions were in this case, but their behaviour is remarkably similar to tactics I have seen used by other officers in the past (both against myself and others). It tends to be the case that one officer will lean in and taunt you, saying whatever it takes to try and get a reaction, whilst holding their arms behind their back so that you cannot use their aggression as a defence if you do react. Meanwhile, the second officer will circle behind you, ready to grab and hold you if you so much as raise your hands above your waist, and the biggest officer will stand ready to strike you (in defence of his colleagues of course) at the first sign of a reaction. As I said, I can’t say that this is what the officers on this particular CCTV film had in mind, because I couldn’t possibly know, and I’m not allowed to say such things. But it certainly looks similar to me and I have no reason to disbelieve what the prisoner in question has since said to me about it all.

I sort of wish I could just put the video, or even just some screenshots up here instead so that you can judge it for yourself. Unfortunately I can’t do that either since it would identify individual members of staff and prisoners and I am forbidden from doing that. Instead this sketch will just have to do.

There are three things that really fascinate me as the topics of books and films. The first is dreams. The second is the nature of reality. The third is time travel. And I think they all fascinate me for the same reason. All of them open up infinite possibilities. They are a never ending source of ideas and inspiration.

A while back I saw a program about the growth in popularity of digital art and I decided to give it a go myself. With it being my first attempt at digital art I thought I‘d start by trying to create something based on an existing photo. This is a lot more difficult in prison where Photoshop is not available, so I had to create the image using individual polygons, coloured separately, in Microsoft Publisher. I noted that this is the year Marty McFly travelled to in Back to the Future and created the above image from scratch based upon a screen shot from the first film in the trilogy. It ended up using at least five thousand polygons and took a full week to complete.

It really got me thinking though. In the films Marty’s actions when he travels to the past affect his entire life when he comes back to the future. I have many regrets. I am in prison because of some of them. And if I had the chance to travel back and give myself a slap, I would do in a moment. But what would my life look like now if I did? Would I have grown up in the same way? Would I have seen the necessity of change in the way I have? Would I have become the person I am today rather than staying the troubled boy I was then? Or would I have ended up getting in trouble in some other, perhaps worse, way instead? Would I have made something of my life? Or would I have carried on down the path I was on at the time and ended up dead? It really was just a matter of time.

Like I said, I would go back and change it all if I had the chance, but only because I’d want to prevent all the heartache I caused for others, including those I love most. For them I would give up all of the experiences I have had, both good and bad. But if it was just down to me, if it would have no effect on anyone else at all, I don’t know if I could. The things I’ve seen, the people I’ve met, the ways I’ve grown and learned and developed; they’re not worth anyone else’s heartache, but they are certainly worth my own.

“One off” is a phrase shouted into the office at most prisons by any officer taking a prisoner off the wing. But it has come to be used as a taunt by prisoners too. Whenever someone has a fight and is dragged down to segregation by the officers, some brave soul will shout out “One off!”. Whenever a prisoner trips over and hurts themselves, necessitating a visit to healthcare, there’ll always be someone with a great sense of humour ready to make the call “One off!”. And whenever someone decides they can’t handle it any more and takes their own life, as the officers run to try and resuscitate them there is always a caring and sensitive voice will ring out across the wing every time, “One off!”.

It is not something I have ever heard said by a prisoner with anything but malice in their voice. It is a phrase that makes me cringe every time. This picture represents the worst possible use of it.

You can view my other art work on my gallery page. 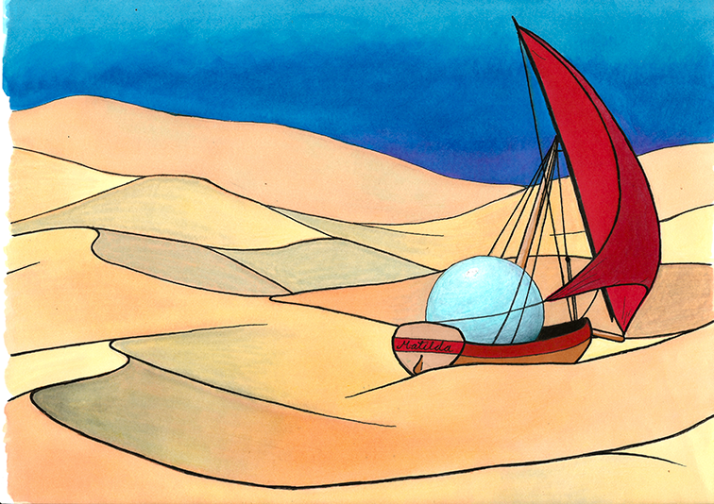 The Final Teardrop. Precious in what has otherwise become a dry and lonely landscape. And stolen. Taken by Matilda. The tear would have been given willingly if it could help her sail free, but taken aboard and coveted with deceitful intent it is no use to anybody. The lesson? The whole world would be yours if you can only be brave enough to ask for it with honesty.

I have little experience in actually drawing using marker pens, but this is one which I am actually quite happy with. Especially because the content and the meaning is so personal to me.

You can have a look at more of my artwork on my gallery page.

For those of you who don’t know, the Tornado team in British prisons is the team responsible for advanced control and restraint techniques, and they usually attend planned interventions dressed in full riot gear such as that depicted above.

I’ve never had to face them myself, but I have witnessed them going into action against others.

The idea of having to kneel with your hands interlocked on your head as they rush into the cell, or else be charged back and pinned under their shields, is intimidating just to think about. To have to go through it is far worse. Especially when you know the state they have left others in previously. 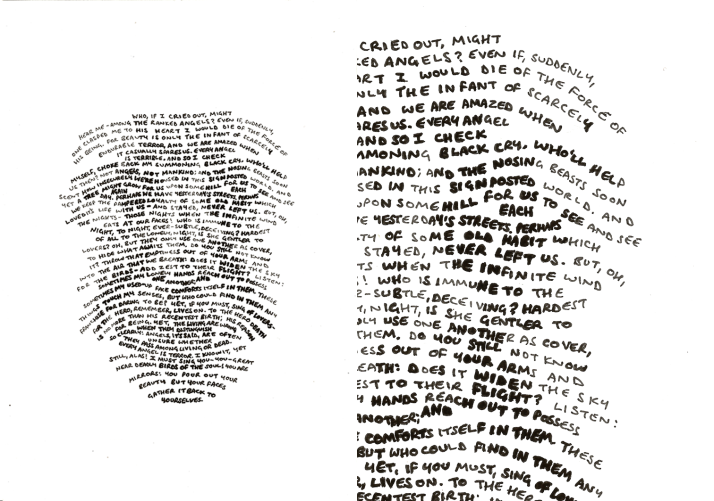 I’ve written before about how Rilke is my favourite poet and his Duino Elegies are massively powerful pieces of work which I find captivating every time I read them. This picture was directly inspired by the elegies and the writing that makes up the contours of the face is taken directly from them. The elegies themselves have a very reflective tone and even their subject matter echoes this. What better way to express them then than as a depiction of Rilke’s own face? His words are his light and his shade. They are the manifestation and the shape of his expression. His words are his mirrors. He poured out his words, but his face gathers them back to himself.

To view a high resolution version of this image, click here or you can access it through my gallery page.

A few years ago I actually painted the above image in full colour. The deep blue balloon was against the rich greens of the jungle and a bright orange sunrise, echoed by the terracotta temples. But I gave that painting away. I don’t regret that. It is where it is meant to be. But I do wish I’d kept a copy. Now all I have is some preliminary sketches. The drawing above is just one of these. In fact, it is one of my favourites and I do think it works in it’s own right.

Some time back I became very interested in lucid dreaming and the idea that, with practice, you can learn to become aware that you are dreaming even whilst still in the dream, and once you do, you can actually start to change the dream and to control it wilfully. This is an even more powerful idea when you consider the restrictions prisoners are subject to. Imagine having all those restrictions and yet still being able to live as you please, free to do anything, whenever you go to sleep. Then I started imagining all of the things I might dream about if I could, by which I mean all of the things I really longed to see and do, were anything possible. This picture was one of the things I came up with.

Many people who saw the final painting asked why there are no people in the balloon. If you’re wondering the same thing then I’ll tell you what I told them. There is. There are two. You just can’t see them. 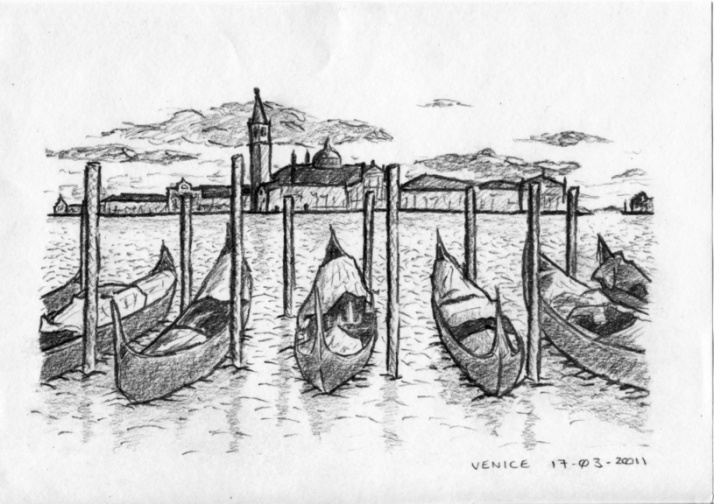 A lot of the drawings, paintings, and prints that I do tend to be of places I wish I could go to. I did this sketch a while back and only recently found it again. The lines of the background are way too thick, but I love the composition of it so I thought I’d stick it up anyway. At some point I may well do another version in a different style to see how that comes out. This drawing started out as a simple sketch but it has actually been changed a number of times since then. The funny thing is that I don’t even feel like it was me who changed it. I knew it wasn’t complete (until it finally was) and I searched for what was missing, but I don’t really feel like I thought of it. I simply put it down on paper. The idea behind it already existed. It was always going to be what it eventually became. I just didn’t know it until I saw it there in front of me.

I’m fully aware that that probably sounds completely nuts to everyone but me, but there it is. Like most of my drawings it is full of symbolism and hidden meaning (beyond the obvious), I’ll leave you to judge and interpret for yourselves.